Thanksgiving is the one holiday that is completely and unapologetically about food. Ok, it’s about being thankful for that food, but still. There’s no other agenda except appreciating the sheer bounty on your plate.

But with so much cooking to do for the main event, many people opt to let the local bakeries handle dessert. That’s all fine and good for non-bakers, but for me, making pie is my favorite part of Thanksgiving. I could happily skip the whole meal and just serve pie. So no matter how busy I am, no matter how many people are coming, and no matter how many dang side dishes I have to prepare, I will never outsource the dessert.

But I have figured out a little shortcut.

When there’s a minimum of three pies on the menu (because apple, pecan and pumpkin are musts, of course) that’s a lot of labor-intensive and, let’s face it, fatty crust to contend with. Plus you’ve got to serve pies the day they’re made or the crusts get stale and soggy. I couldn’t help but think: Can’t we do something crustless?

The solution: dialing back the liquid, adding a little flour, and folding beaten egg whites into the batter. The result is a souffle-like pudding-cake of sorts with the exact flavor of a fabulous pumpkin pie.

Whether I’m baking a traditional pumpkin pie or making these puddings, I always go heavy on the spices, using hefty doses of cinnamon and ginger, then rounding things out with allspice, nutmeg and clove. I also precook the spices along with the pumpkin puree in a saucepan, so that the flavors can meld and deepen with the heat. It’s a trick I learned from Cook’s Illustrated. I also use dark brown sugar, because I think the molasses flavor works so well with those spices.

The best things about these little pudding cakes is they keep for days in the fridge, so you can cook them well in advance. And if you have some left over, no problem, because there’s no crust to get soggy.

I will fully admit that I’ve eaten them for breakfast (they are made with eggs and a vegetable after all). But their highest calling is as an easy, make-ahead, elegant fall and winter dessert, especially when you add a dollop of spiced or boozy whipped cream and a thin ginger cookie. 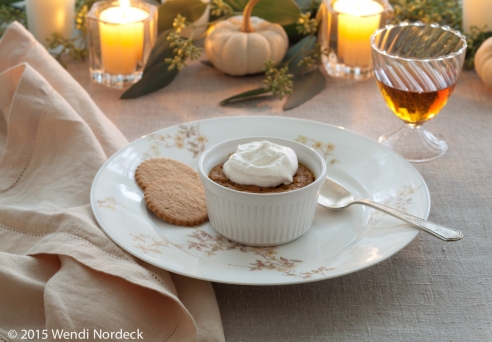 When you want pumpkin pie, but not the pie part, make these. They’re a great do-ahead dessert for Thanksgiving, or any fall and winter holiday, and won’t disappoint anyone craving a traditional pumpkin pie.

Preheat oven to 350 degrees. Butter eight 6-ounce ramekins. Bring a kettle of water to a boil.

In a medium saucepan set over medium heat, combine the pumpkin, spices and salt. Cook, stirring, for 3 to 5 minutes, until the mixture is hot, fragrant and a little darkened. Remove from heat. Add the butter and brown sugar, stirring until melted and combined. Whisk in the milk, egg yolks and vanilla until combined, then stir in the flour.

In the bowl of a standing mixer fitted with the whisk attachment, beat the egg whites on high speed until soft peaks form. While beating, sprinkle in the granulated sugar, a little at a time, and continue beating until the whites form stiff peaks.

Fold one-third of the egg whites into the pumpkin mixture to lighten it, then fold in the remaining egg whites. Divide the mixture among the prepared ramekins, filling them all the way to the top (they won’t puff too much).

Set the ramekins in a large roasting pan or baking dish and place on the middle rack of the oven. Pour the boiling water into the pan to make a water bath. Bake, uncovered, for 30 to 40 minutes until puffed and cooked through. Remove from heat and allow to cool. Refrigerate until ready to serve. (Pudding cakes will keep, refrigerated, for several days.)

To serve, add a dollop of sweetened whipped cream and a garnish with a thin ginger cookie.