Built on crispy, fried potatoes, smoky bacon and, more often than not, bits of savory meat, hash must be one of the most universally appealing dishes known to mankind.

That name, though. Hash. Not appealing at all.

Maybe we should start calling hash a “potato fry-up” or a “Yukon Gold sauté.” Something more evocative of the carb-tastic delight it is. 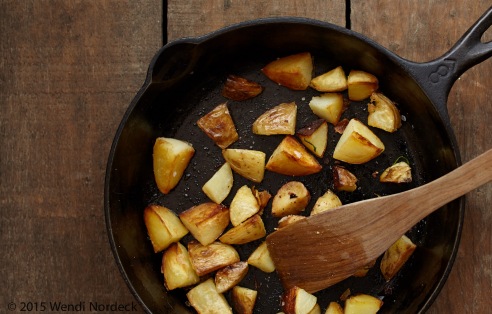 Better yet, maybe we should all just start eating it a lot more, so the name becomes deeply associated with comforting, belly-filling pleasure, evoking Pavlovian drool-responses and eclipsing any negative connotations until they’re long forgotten.

Sounds like a good plan to me. If hash isn’t already on steady rotation at your house, it should be. It’s one of my favorite ways to use up leftovers, whether they’re bits of braised pork, baked salmon, or roasted veggies. Potatoes, after all, go with pretty much everything.

But even though it’s considered a brunch staple, hash is usually considered dinner in my house, even when there’s an egg on top. If the French can eat omelettes for dinner, why can’t we have hash and poached eggs?

Helping push things in a savory dinnertime direction is the mustardy vinaigrette I drizzle on at the end of cooking. I usually eye-ball the amounts, keeping the oil to a minimum, and sometimes play with adding fresh herbs. But no matter what, the vinaigrette serves to bind all the ingredients together into a deliciously cohesive dish. Otherwise, hash can seem like a disparate mix of protein and vegetables piled on a plate, like someone made a, well, hash out of your meat-and-two-veg dinner.

In an attempt to keep things a little on the light side, I precook my potatoes in boiling water. That way they won’t need to fry as long and soak up so much oil. And I always include onion and garlic in the mix. Everything else, though, is left up to inspiration and chance.

I always cook extra salmon so I can use the leftovers in dishes like this. Although most would consider hash a breakfast staple, it’s hearty enough to stand-in for dinner, especially with a poached egg on top. The mustardy vinaigrette ties all the flavors together.

To make the vinaigrette: In a small bowl, whisk together both mustards, horseradish, vinegar and olive oil. Set aside.

To make the hash: Place potatoes in a large pot and cover with water by 1 inch. Set over high heat, cover, and bring to a boil. Remove the lid, reduce heat to a simmer, and cook until potatoes are easily pierced with a fork, about 15-20 minutes. Drain and cut into 1-inch cubes.

Set a large skillet over medium-high heat. Add the diced bacon and cook until crisp, about 5 minutes. With a slotted spoon, transfer bacon to a plate lined with paper towels, leaving behind as much fat in the pan as possible.

Return the pan with the bacon grease to medium-high heat. If there is less than 1 tablespoon of fat in the pan, add a little oil. Add the diced onion and green pepper and season with salt and pepper. Sauté, stirring occasionally, until tender, about 5 minutes. Add the garlic and sauté about 1 minute more. Transfer onion mixture to a bowl.

Return the pan to medium-high heat and add 1 tablespoon vegetable oil. Add the cubed potatoes and season generously with salt and pepper. Cook, undisturbed, until browned on one side, about 5 minutes. Turn and brown the other side, adding more oil if necessary, about 5 minutes more.

Add the onion mixture, bacon, flaked salmon and green onions to the potatoes in the pan. Saute, stirring gently, until salmon is heated through. Add the vinaigrette and stir until evenly coated.

Divide hash among plates and garnish with chopped parsley.