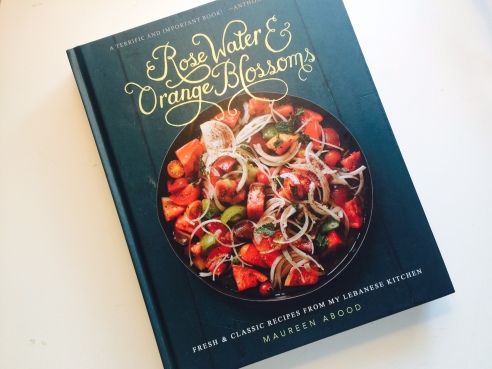 There’s been a strong surge of interest in Middle Eastern cuisine lately, one that goes way beyond tabbouleh and falafel, but doesn’t dive so deep into antiquity that the dishes seem out of reach. It’s commonly referred to as the Ottolenghi effect, after the Israeli chef who launched a London empire by blending the flavors of his homeland with those of the Mediterranean, creating super-fresh, accessible-yet-modern dishes that changed the way Londoners ate and cooked (and, thanks to his cookbooks, the rest of us, too.)

The way he plays with Middle Eastern flavors, paying homage not so much to tradition but to flavor,  is nothing new to cookbook author Maureen Abood. As a second-generation Lebanese American, the Michigan native grew up around a hybrid table, where mac and cheese was just as common as stuffed grape leaves. And as she came into her own as a cook, she embraced both influences deliciously, cataloguing everything on her blog, Rose Water and Orange Blossoms, and publishing a gorgeous new cookbook last spring.

I had been hearing great things about her book, so when I spotted it at World Foods (one of my favorite specialty stores in Portland) I snatched it up. Through it I’ve learned all sorts of techniques and insights into Lebanese cooking, without ever feeling like I was slogging through an advanced degree in Middle Eastern studies. I’ve been inspired to slather labneh on just about everything and use peeled chickepas for the smoothest hummus. And after reading her family stories about growing up in Michigan, I found myself scouring VRBO for vacation rentals on Lake Michigan. Seriously.

But mostly I love how her book bridges the gap between traditional Lebanese dishes and the modern table, inspiring me to reach for my jar of tahini and tin of za’atar a lot more often then I used to. She offers straight-up classics like kibbeh and baba gannouj, alongside twists like Kofta Burgers, resulting in a book that feels fun instead of overly earnest.

One of my favorite dishes in the book is the Roasted Leg of Lamb with Black Cherry-Pomegranate Salsa. With its mint, parsley and pomegranate molasses combined with oh-so-Michigan cherries, this dish is the perfect representation of Abood’s Lebanese-American style of cooking. Like Ottolenghi, she respects tradition, but isn’t afraid to play with it a little, too.

Photo by Jason Varney from “Rose Water and Orange Blossoms”

One of the most exciting cuts of meat to celebrate with is a bone-in leg of lamb. The presentation is so luscious on a big carving board or platter. Up in Michigan, we are always looking for new ways to eat our abundant cherries—dressed with pomegranate molasses and spooned over the lamb, they taste just as striking as they look, a perfect sweet and tangy balance to the rich meat.

Bring the lamb to room temperature for about an hour before roasting. Using kitchen twine, tie the legcrosswise 3 or 4 times, about 3 inches / 7.5 cm apart. Place the lamb on a rack set in the bottom of aroasting pan and drizzle the olive oil evenly over the top. Rub the oil over the fat and the meat and season it liberally all over with salt and pepper.

Position a rack in the oven far enough below the broiler so that the meat is a few inches from the heat. Turn on the broiler to high and broil the lamb for about 5 minutes, or until the top of the lamb is caramelized and looks seared. Turn the lamb over with tongs and broil the opposite side in the same way. Remove the lamb from the oven and flip it back to its original side up. Turn off the broiler and reposition the oven rack to the center of the oven.

Heat the oven to 325 degrees F / 165 degrees C. Coat the top of the lamb with the minced garlic, tent the lamb looselywith foil, and roast for 1 hour, or until the internal temperature reaches 135 degrees F / 57 degrees C on a meat thermometer; if taken out at this temperature, after the lamb rests it will be medium-rare to medium.

Remove the lamb from the oven and let it rest for 15 to 30 minutes before snipping the twine off and then carving. While the lamb rests, make the cherry salsa (it can also be made a day in advance). In amedium bowl, whisk together the pomegranate molasses, lemon juice, olive oil, salt, and pepper. Add the cherries and stir to coat them with the vinaigrette. Gently stir in the parsley and mint.

To carve the lamb, place it on a cutting board with the bone parallel to the board. Make perpendicular slices to the bone, angling straight down until the knife hits the bone. Cut the lamb off the bone by slicing through the bottom of the slices, keeping the knife along the bone. Serve the sliced lamb on a platter with the salsa alongside or spooned over the slices.