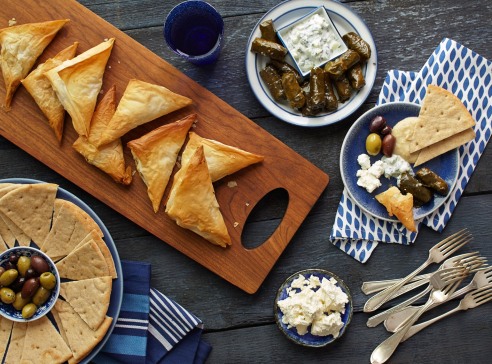 My kids would turn up their noses at a lamb burger. But wrap that ground lamb in a pastry shell? Suddenly dinner isn’t anything to whine about any more.

I call it the “pie effect.” I can put almost anything in a pastry crust and they’ll happily eat it. (Come to think of it, I need to try this with squid.)  Over the years, I’ve turned all sorts of things into pot pies (like this one made with leftover chicken and greens), but sometimes you just want a little hand-held pie pocket all to yourself. That’s when I make spanakopita.

There’s a lot to love about these savory little pastries. First, they’re highly addictive, because they shatter into delicate flaky shards with each bite. Second, you can use store-bought dough without any shame (because, really, no one makes their own phyllo dough). And third, they’re crafty and fun to make — especially if you get the kids to do it.

Usually I prepare the filling, then turn my kids loose to fold up the triangles. I bake up a sheet pan full for dinner that night, then put the rest in the freezer to pull out for quick weeknight dinners, weekend lunch or after-school snacks.

I wrote a full, step-by-step recipe for New Seasons’ blog The Table last year. Bursting with spinach, ricotta and feta, they make a flavor-packed vegetarian meal. But I also make a version with ground lamb and a combo of spices used in Middle Eastern kofta — coriander, cumin, cinnamon and allspice. They’re anything but traditional, but they’re definitely delicious.

It seems a bit misleading to call these Middle-Eastern-spiced lamb-filled pastries “spanakopita,” seeing as they’re not at all a traditional take on the classic Greek spinach pie. But they do have spinach in them, and calling them phyllo triangles doesn’t sound nearly as good. You can find boxes of phyllo dough sheets in the freezer section. I like the organic version from The Fillo Factory (available at New Seasons and Whole Foods) because it’s not as prone to tearing. Be sure to put them in the fridge the night before, so the sheets have time to properly thaw. Serve these as a snack or appetizer, or combine with salad or mezze dishes for a hearty meal.

Heat the oil in a large sauté pan set over medium-high heat. Add the onions and cook, stirring frequently, until completely soft and beginning to brown. Add the garlic and sauté until fragrant, about 1 minute. Add the lamb and cook, stirring occasionally, until browned. Remove from heat and drain off the excess fat. Stir in the coriander, cumin, cinnamon, allspice, cayenne, salt, pepper and lemon zest. Taste and adjust the seasonings if necessary.

Place spinach in a colander squeeze over the sink to wring out all the excess liquid. Add spinach to the lamb mixture, along with the chopped parsley.

In a large mixing bowl, beat the eggs until well blended. Stir in the lamb mixture until well combined. Fold in the crumbled feta (and toasted pine nuts, if using) until evenly distributed. Allow filling to cool completely before using. (Filling can be made several days ahead and refrigerated.)

Unroll the thawed phyllo onto a clean, dry surface. Cut the stack of sheets in half so you have two stacks that are 13-by-9 inches (skip this step if you’re using a different brand that has smaller sheets). Cover the stacks of phyllo with a slightly damp tea towel to keep the sheets from drying out. Set a few parchment-lined baking sheets nearby.

Lay one sheet of phyllo in front of you with the short side closest to you. Brush the surface lightly with melted butter. Fold the sheet in half lengthwise, like you’re closing a book, creating a narrow strip. Brush the surface with melted butter. Set a heaping tablespoon of filling near the bottom of the strip. Fold the bottom right corner diagonally up and over to the left, aligning the edges, to create a triangle.

Keep folding, as you would fold a flag, until you reach the end of the strip. Brush the edge with melted butter to seal it and place the triangle on the baking sheet. Brush the top with melted butter. Repeat with the remaining sheets of dough and filling, rewarming the butter as necessary. (If making ahead, freeze the triangles on baking sheets until firm, then pack in ziptop bags.)